"Oakland's hills are but a few miles from the flatlands of West Oakland, but the landscaped front yards up the hill and the unforgiving streets of the flatlands are culturally a world away from each other." ~ Chip Johnson, S.F. Gate.com

"For whatever reason they were drawn in the first place, Oakland’s Council districts have evolved to represent a certain theory of government: that to a greater or lesser degree, each district represents a cross-section of Oakland’s diverse socio-economic population. ...

Instead of fiddling with maps and neighborhood lines in the beginning, we should first have a discussion of whether we want socio-economically diverse Council districts (as we have now), or if we want those districts to be divided in such a way that the citizens within them have more similar socio-economic interests. It’s an important discussion, and would decide the future way government operates in the city."


What is your reaction to the article? 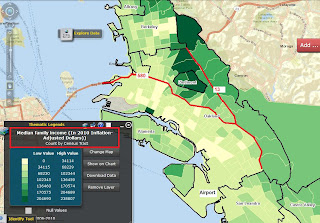 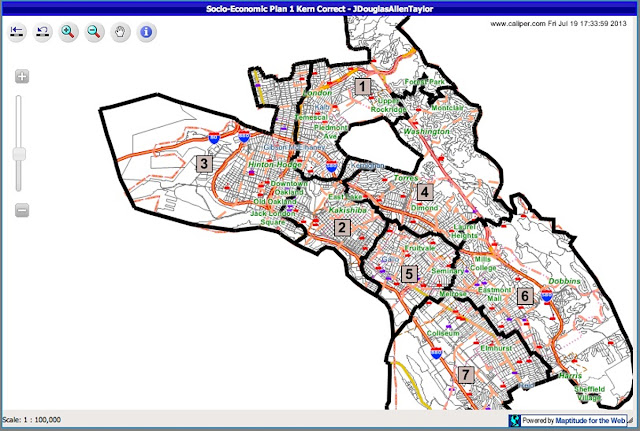 Redistricting sounds easy enough, at least in theory, does it not?

Anyone who can add and subtract should be able to prepare a plan that evenly distributes population such that "each Council District shall contain a nearly equal number of inhabitants" (City Council Resolution No. 84443).

We start with a city population count of 390,724. Divide that by seven districts and we arrive at an ideal or target population of 55,818 for each district.

It follows that the two Council Districts that are over the target need to shrink and the three that are under need to expand so that their populations are equalized.  The remaining two districts, which are only slightly below the target population, could be left alone or given a minor tweak.

So, why all the fuss?

Simply stated, the devil is in the details. That is, how do we get from here to there?  There are myriad ways this population balancing can be accomplished. Redistricting can take the form of tweaking existing Council Districts, leaving them largely intact, or it can involve radical redesign using a "clean slate" approach. Though, to pass the smell test, it must be done in such a way as to comply with the U.S. Constitution, federal and state laws, and the City Charter.

We might start by asking, what does the City Council mean by "nearly equal" in population?


It should also be noted that even if districts do not need adjustment from a population standpoint, their boundaries may still be adjusted to: better reflect communities of interest, avoid splitting or reunite neighborhoods, prevent dilution of minority voting power, make them more compact, and/or to easily recognizable boundaries without a lot of zig-zags.

From my perspective, "nearly equal" or "as equal as possible" should be construed to mean within a very narrow range of deviation, perhaps no more than 5% (+/- 2.5%) at the outside. But, that is just my opinion.  The EPA disclaimer, "your mileage may vary," certainly applies here.

Posted by Unknown at 2:12 PM No comments:

Unhappy with your political leadership? Oakland’s 2013 Redistricting Process is your once-in-a-decade chance to influence who’ll represent you at the most local level.

"Council districts shall reflect communities of interest as much as possible."

The paramount objective in redistricting is to draw district boundaries so that they are "nearly equal" in population, and to do so in compliance with the the U.S. Constitution, the federal Voting Rights Act, the City Charter, and other applicable laws.

Next, in order of priority, in the criteria adopted by the City Council (Resolution No. 84443): "council districts shall reflect communities of interest as much as possible."

This, naturally, begs the question: What are "communities of interest?"

Generally speaking, "communities of interest" are whatever the people living in a particular area, neighborhood or community understand them to be. For example: a neighborhood with a strong sense of identity and cohesiveness, a police beat, a school attendance area, the area around a business district or a park. It could also be a combination of neighborhoods that share the same culture and/or socioeconomic characteristics.

More specifically, Oakland city staff provide the following definition in their staff report presented to the City Council on June 4, 2013.

Neighborhoods, defined both by official and informal boundaries:

Posted by Unknown at 3:01 PM No comments:

"Unhappy with your political leadership? Oakland’s 2013 Redistricting Process is your once-in-a-decade chance to influence who’ll represent you at the most local level."   ~ Libby Schaaf, City Councilor, District 4


Redistricting is the redrawing or adjusting of electoral district boundaries for governmental entities to ensure that they are balanced with the same number of residents.

City Council District areas and borders were last adjusted by ordinance and their populations balanced in 2003 using the 2000 census.

According to the 2010 Census, Oakland's population is 390,724.  District populations are out of balance: 2 are above, 3 are below, and 2 are close to the target population of 55,818. Consequently, significant changes will need to be made in order to evenly distribute population between the districts.

On June 4, 2013, the City Council adopted Resolution No. 84443, which sets forth the following criteria for the 2013 Redistricting, in order of priority:


Clear communication about redistricting, community participation, and transparency will be essential throughout the process.

Here is a link to the City of Oakland's official redistricting webpage with more information regarding the process and the timeline for public participation and adoption by the City Council.

From this page, you will find a link to an online mapping tool using Maptitude software, which you can use to create your own redistricting plan(s) and, if you wish, share with others and submit to the City for public consideration.